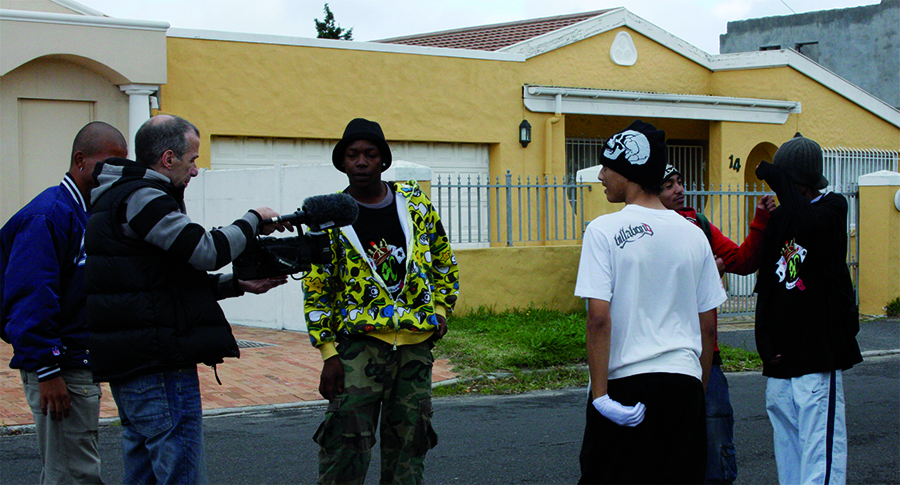 Arabian Rap – Beirut | Beyrouth – click on the pics
A workshop with Rapper of Beirut in coopeartion with the NGO Permanent Peace Movement founded by
USAID and Goethe Institute Beirut. Even they are all Lebanese, so they see the situation of them different and sometimes it has to do with their believe. The PPM does work for the peacefull behavior. It was an amazing workshop. I learned a lot about Hip Hop and the Rapper bring me to facebook. I a time where it was not very popular in Germany. Still i have contact to a few of them. I´m happy to had the chance to meet them.

Cape Town | South Africa
An evening before i met a very nice guy, Luke. He is a stuntman and he joined my workshop with the Hip Hop dance crews.
He choreographed a short street fight and explained them how to make a „big show“ for the camera. THX Luke & Brenda!!!

Here you see the making off. It is nice to see how all are watching what we did. They gave us a great support!!!

GRADE 7 school Cape Town
By the chance i could gave a media & lifestyle workshop in a Grade7 school in Cape Town.
Thanks by Brenda Rode the teacher.

All other clips are in German, no subtitle.

MEDIALER DIALOG
in cooperation with the police department for prevention we develped the idea to start a communication
via media before they start to talk at a round table.

IMPORTANT is that the most interesting part is the work for the video. What happen behind the scene is the interesting work. Here happen a lot of talks, about nearly every subject; familly, work, education, film of course, music and own behavior.
Once a social education worker told me, in fact of what happen in my workshops and how I worked with them he could use this 3 days of film making for future conflict solving. That`s a great compliment, thx!

THE FIRST MOBILE FILM FESTIVAL 2008 & 2009
Remember which quality the first cell phones had. There was no HD the resolution was 640×480 pix
And the sound was terrible. But, if you know the weakness of the mobile videocams, you can work with them
like a professional. I did supervising, helped them to bring the story in a form. It was a great work.

The motto was ACTION vs. VIOLENCE.

The workshop was with social weak young adults. The such a lot of fun that we did the second video.

Another video with youth. They wanted to show about lieying. For that they choose
the situation for homeless people. It was interersting for them play another role. By acting
the get contact to homeless man and he explained them his story. They were deeply impressed.

VOITH Ausbildungszentrum Heidenheim / Brenz
With the class of Technical Design by the company VOITH we did the next video.
The girls want to show the discrepancy of the part from the Rapper language. It
was cold and the door at the end was closed. But they did it.

Diakonie | Evangelische Kirche Heidenheim a. d. Brenz
In the same city I worked with the Evangelische Kirche (protestant church) together. The aim was to train the youth in media work.
And give them a forum where they can talk about their believe.
As so often, the projects was stopped, because we didn´t get any fundraising.